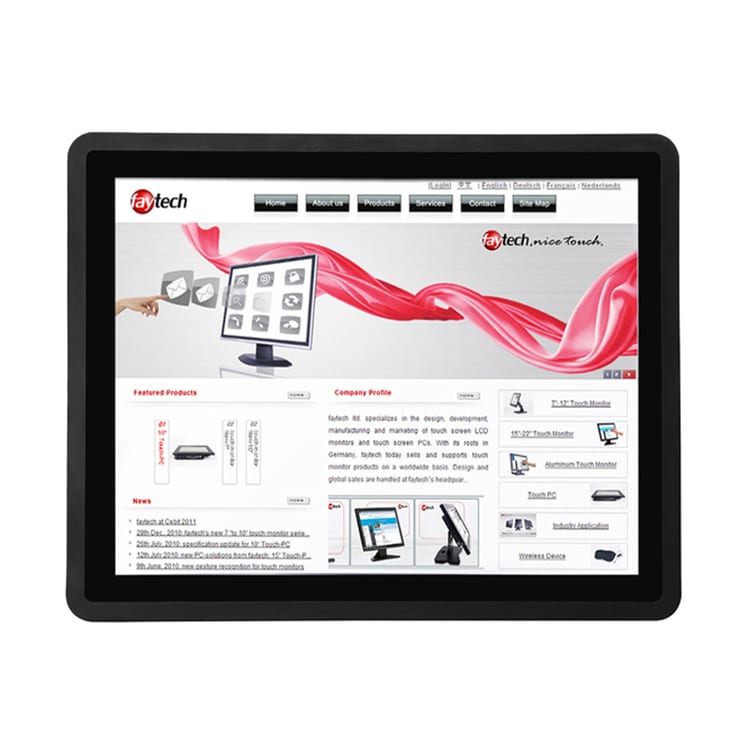 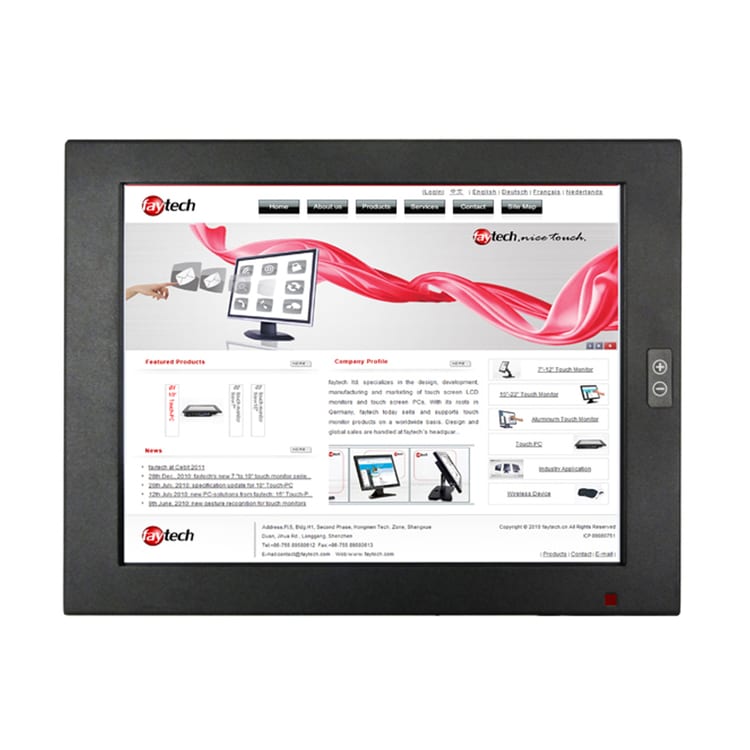 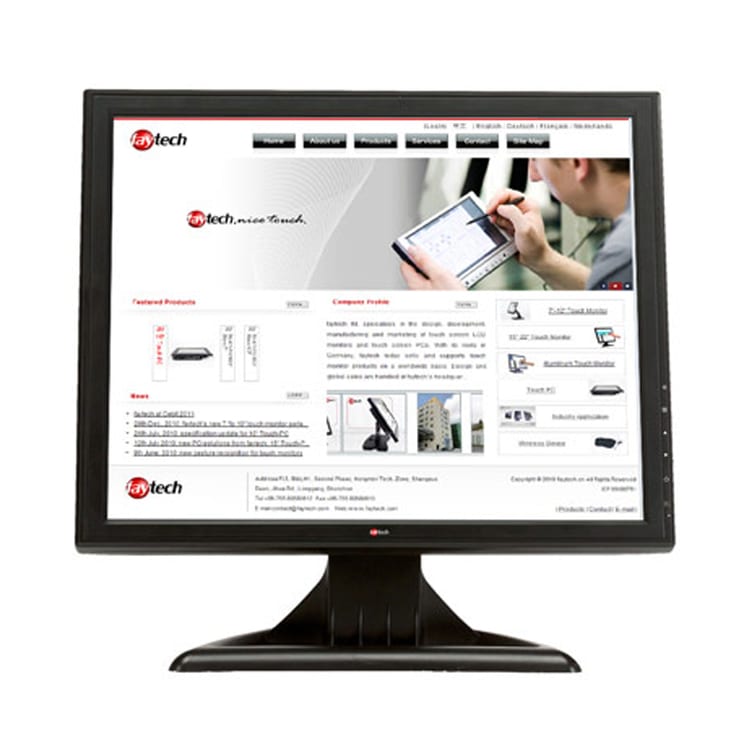 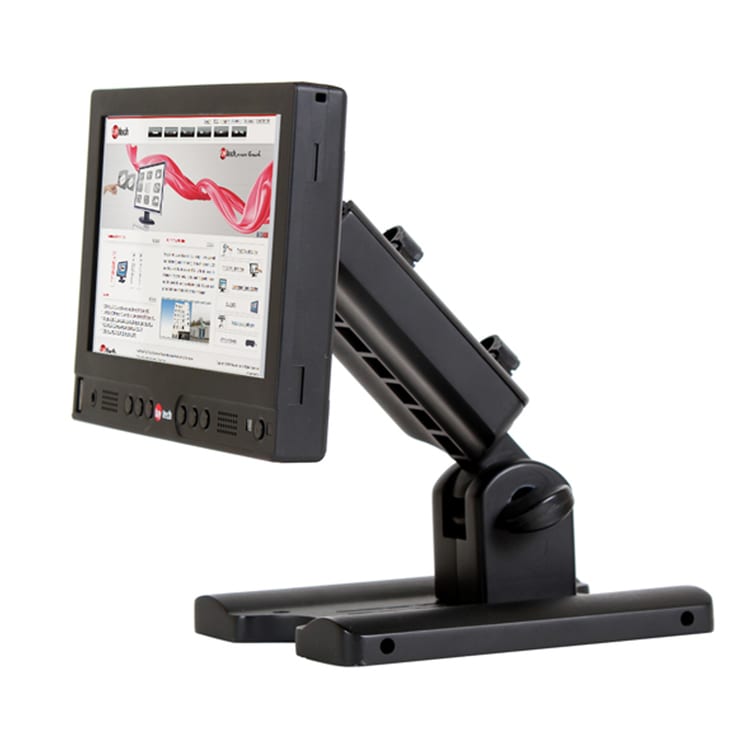 One of the many challenges facing businesses today is how to select touch screen monitors. Many different applications have very different demands. Specific technologies or functionalities that might be beneficial in one industry, might be harmful in another.

Many possible suppliers offer solutions that might but fail to offer enough information about those products to allow for a truly informed decision to be made. faytech solves these issues by offering a comprehensive of touch monitor products from 7” through 55”, with a clear choice to suit any application.

Additionally, our sales team is always available to help answer any and all touch monitor questions.

Technical specifications and drawings are available to download for all of our standard modules. Our touch screen monitor lineup is divided into three major categories:

Please let us know your custom product needs and we’ll be happy to contact you.

(PCAP) touch technology was invented in the . Devices featuring projected capacitive touch first started to appear in the late , but none truly gained real popularity during that time. The first device to truly popularize PCAP technology was the iPhone in 2007. The proliferation of the over the next 5 years made PCAP the consumer touch technology.

Today, PCAP makes up over 97% of all display touch panels worldwide. This scale of adoption has pushed the cost of PCAP technology to be very close to that of 4-wire resistive touch, and much cheaper than other forms of resistive touch. Nearly all consumer-facing touch devices (phones, laptops, tablets, casino games, automobiles, retail kiosks) have adopted the technology exclusively. Non-consumer industrial applications also tend to prefer PCAP due to the strength afforded by its front glass surface and superior optical clarity.

Recent advances in PCAP technology are allowing it to continue to gain market share in several of the areas still occupied by resistive technology.

PCAP touch screens are essentially a grid of transparent capacitors typically spaced 5-12mm apart throughout the touch surface. The technology works by detecting changes in the electric field at each capacitor ‘node’ when a conductive object touches the front surface of the device. The touch controller accepts reports of the capacitance at each node every few milliseconds – if any node has a capacitance past a programmed threshold, a touch is registered.

The conductive films do not need force or motion to function, so the front surface can be a strong glass (anywhere from 0.4mm to 6mm thick), or even plastic material. For this reason, PCAP touch devices are the most rugged of all current touch and do not have the ‘overuse failure’ mechanism of 4-wire resistive touch.

They are extremely popular, in part, due to the multi-touch and gesture controls (drag, flick, pinch) afforded by the technology that up great interactivity options for end-use applications.

Since there are no moving parts in a PCAP touch, the layers are always optically bonded, which gives PCAP a better overall look than resistive, with significantly better contrast and higher brightness.

However, PCAP touch screens only function when touched by a conductive material, such as a finger or capacitive stylus. Some PCAP touch devices can have issues with liquid spills registering as touches, or heavy gloved fingers failing to trigger a touch (though current-gen industrial devices have mostly solved these problems). faytech industrial PCAP devices have been designed for, and tested with, heavy rain and thick glove environments.

Most Common Applications for PCAP technology:

Resistive function by having 2 ITO layers separated by air and spacers. When a force causes the 2 ITO layers to touch, a circuit is completed and the location of the touch is reported. Due to the nature of the technology, just about any object can be used to touch the screen (gloved hands, long fingernails, credit cards, pens).

Resistive touch technology is also great in scenarios where spills or dirt is expected to end up on the touch surface – unless the weight is enough to push the film against the underlying glass, touch functionality will remain. Since it requires some small amount of force for a touch to register, it is less likely than other technologies for a user to inadvertently register a touch on the screen.

However, resistive are less optically clear than competing technologies due to the 2 layers being separated by air, which increases reflectivity. Lower cost 4-wire resistive touch screens are typically prone to failure after around 200,000 touches, though more rugged 5-wire versions are available which alleviate this issue (faytech offers both).

Typically, the top layer of a resistive touch panel is a thin PET film with ITO rear coating, which limits how rugged these units can be made (though some smaller units can be made with a thin glass front surface). Resistive do very well with single point but tend to suffer in applications where multi-point and gesture touch controls are required.

What many suppliers view as an upgrade, faytech views as a standard. We believe strongly in the benefits of direct bonding and believe it should be included in all touch products – and so it is in all of our products.

The advancement of touch screen displays

Early touchscreen displays could only sense a single point of input at a time and only a few of them were capable of detecting the strength of the pressure. This was changed with Apple’s ongoing commercialization of the multi-touch technology with iPhone and iPod touch.

Multi-touch touch screen technology allows the user to interact with the screen with fingers, instead of a stylus. The movement of fingers creates gestures, which are then sent to the software. The initial popularity of the iPhone, has brought touch technology to many smart phones and hand-held devices which paved the way for all-in-one computer systems.

Many companies are upgrading to touch monitors

Faytech North America, as a touch screen manufacturer has realized that many companies have upgraded their products, either by adding multi-touch support to the track-pad or by making their tablet PC’s interactable without using a stylus. Both wall mounted and table mounted options have few ergonomic problems. “gorilla arm” was a side effect, that has limited wall-mounted option as a mainstream.

Developers of touch systems, failed to notice, that humans are not designed to hold their arms extended for long periods of time while making small and precise motions.

Table embedded displays do not share this problem, however, users can develop neck pain after using it for a period of time and the view might be obstructed by their arms.

High adoption of touch systems in the retail sector

Ever since their development in 1971, touchscreen monitors have been finding their way into more and more commercial applications. They come in any number of configurations, but in the end, they all function on the same principle and that is “see and touch”.

Fast food restaurants were one of the first businesses to implement these screens on a retail level but now more and more business are discovering the benefit of having them available at their point of sale locations.

The resistive type uses a normal glass panel, that is covered by a resistive and a conductive metallic layer and a protective layer (scratch resistant) on top of all this. When you make contact with the screen, the two metallic layers are joined and the change in electrical field is detected. The circuit on the display  then calculates the coordinates and transfer them to the screen software. The driver then transfers the information about the coordinates to the OS, in a form of events similar to mouse clicks and drags.

This system registers an event as soon the surfaces are joined. This means, you can use a finger, a pen or any other item as input.This also makes it most vulnerable to physical damage by sharp objects. The metallic layers only transmit about 75% of the light, making its display clarity the lowest of the three.

With the capacitive type, a layer storing electrical charge, is placed on the glass. When you make contact with the layer, a small amount of the electrical charge is transferred to you, decreasing the charge on the layer. Sensors, located at the corners of the screen, detect a change in electrical charge levels and transfer the information to the software to process.

The biggest advantage of capacitive type over resistive is that it has 90% light throughput. This gives the capacitive touch screen monitors a much clearer picture. Since this type of technology uses electric charge to detect an event, you must use a conductive input, such as a finger.

The surface acoustic wave type uses two transducers and a reflector, all placed on the glass plate. One transducer is sending electrical signals to the other and the reflector reflects this signal. The receiving transducer is capable of detecting and locating any event. Since this type has no metallic layers placed on the display surface, they have 100% light throughput, and therefore the most clear picture. Similar to resistive, this type detects events by almost any object, except very small or hard items, such as a pen.

These are just the most commonly used types and we at faytech North America have our own unique touch solutions. There are many other touchscreen technologies out there, such as strain gauge configuration (from 1960’s) or relatively-modern optical imaging technology. And recently, new technologies have been developed such as sunlight readable monitors, rugged monitors and open frame touch screen monitors that can withstand extreme environments.

Touch screen displays are very easy to figure out and most people will learn how to interact with them very quickly. The learning curve is very short. A recently hired employee no longer has to go through lengthy training sessions and can be found effortlessly using an intuitive touch interface within a few hours.

The technology developed by faytech North America brings significant time savings to point of sale systems in any retail establishment. The touch solutions simplify most transactions. The employee – or the customer – interacts with the screen, reviewing the potential options and makes a selection.

Products that cannot be bar coded, like perishable items, for example, or things that are small or with irregular surfaces that would hinder barcoding can now be easily processed through a point of sale with a touch display.

The viability as an interaction tool for the retail establishment has been established for some time now and this is why more and more businesses everywhere are implementing them.

Another factor is that faytech North America touch displays have also become more affordable in recent years and they are a technology that isn’t going to become obsolete in this lifetime.